UMPIRES RULE: Considerations in the correct use of umpiring cards in the issuing of personal penalties "> 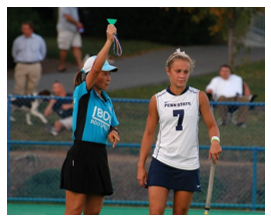 Sending players off for personal penalties should be an unwanted component of the game by both umpires and players alike. Ideally the penalty cards consisting of green, yellow and red should stay hidden in the umpire’s apparel. However when these cards are to be used they must be used correctly according to the rules and correct interpretation of the rules as a means of correct umpiring control. Without control games go haywire. Umpiring control is a skill and is not to be exploited through a lack of knowledge or emotional instability. Too often you see frustrated umpires choosing to use umpiring cards when it is a lack of umpiring control and rule knowledge are the causes. 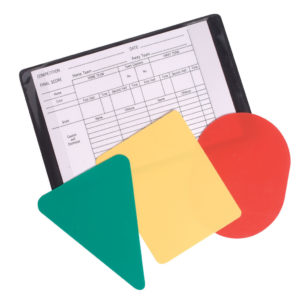 Another guideline when looking at the issuing of personal penalties is the code of ethics that is in place in respective hockey associations. Umpires are to be valued and players have a responsibility through provided player code of ethics to respect umpires and if applied there should not be a reason for umpires to use a card for player dissent. Similarly umpires have a code of ethics that guide their relationship with players according to their role. See below example.

There is another aspect to consider in the correct use of personal penalty cards and that is how to use them.  The below video demonstrates why and how to use penalty cards.

In summary when an umpire given the wanted or unwanted task of umpiring he or she needs to understand the rules, code of conduct, and implementation process for using personal penalty cards. Without this knowledge umpiring control will be negligible.

14.1 For any offence, the offending player may be:

14.2 Temporarily suspended players must remain in a designated place until permitted by the umpire who suspended them to resume play.

14.3 Temporarily suspended players are permitted to rejoin their team at half-time after which they must return to a designated place to complete their suspension.

14.4 The intended duration of a temporary suspension may be extended for misconduct by a player while suspended.

14.5 Permanently suspended players must leave the field and its surrounding area.

Example: CODE OF CONDUCT FOR UMPIRES

INSTRUCTIONAL VIDEO ON THE USE OF PENALTY CARDS BY FIH