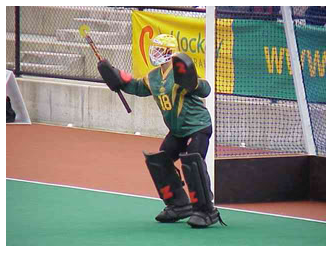 For hockey goalkeeper it is critical to stay focused during the whole game because you never know when the opponents could get a half chance and score on you. Always try to be ready for action despite the fact you may not be in the ‘thick of the action’. You may only get one chance to be a hero or not. Here are tips that will help you stay focused during the whole game.

You should never underestimate your opponents no matter how bad they are. On this way you will not only keep yourself focused, you will also gain more respect from your opponents.

Treat every game like it was a World Cup final. Only on this way you will be able to keep your focus during the whole game and prohibit your opponents from scoring.

If the opponents can’t even pass the centre line you should consider performing some exercises to keep yourself ready for anything.

One type of exercise you may use for keeping yourself focused is stretching.

You will feel more calm and ready for action.

When standing in the goal you should try to predict whether your opponents will attack from the wing or from the middle of the field. Reading the strategic development of the game is a skill that will develop prediction and keep you focused.

For example, if you opponents have a good striker you can be pretty sure that they will try to pass the ball to him very often. Practise visualisation whereby you would anticipate the striker receiving the ball and the type of shot he or she would execute.

By talking with your defenders you will not only help them covering their area better. You will also help yourself stay focused and avoid having your mind on some other place.

However, you don’t need to talk every second or so. Instead try to say something at appropriate times that supports and encourages your defenders

A study done of elite ice hockey goalies shows that one of the keys to goalkeeping focus performance is what researcher Joan Vickers at the University of Calgary is dubbed “the quiet eye, the critical moment of focus prior to action. The research found that goalies saved shots consistently when elite goalies focused directly on the puck nearly a full second before the shot was released nearly three-quarters of the time. Their gaze was only on the body of the shooter 2 percent of the time. according to the researchers although looking at the puck seems fairly obvious, when they tested novice goalies they found the novice goalies scatter their gaze all over the place and have a much lower save percentage than the elite goalies.

This research is exciting for field hockey goalkeepers because it’s new information that can be immediately incorporated into a goalie’s game with the proper training. For example goalies can practice moving around but focusing their gaze on a pre-identified object.

Maintaining a game focus is a skill to learn " data-via="" >