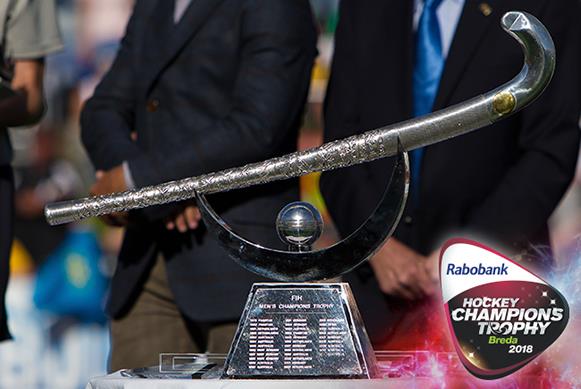 The World Cup is definitely the premier International hockey event in 2018 but it should not detract in significance from the Champions Trophy which is a historical battle between the top nations. How it pans out will provide insight into possible results forthcoming with the World Cup 2018 programmed for later in the year.

The Champions Trophy is now 40 years in the making and continues to be a respected tournament on the International event schedule. For this significant reason we have used two FIH articles to bring to the attention of Go Hockey News readers as a ‘Feature’ story. We thank FIH for their material.

The city of Breda (Netherlands) will host the Rabobank Hockey Champions Trophy later this month. If any nation can ensure the event will be a premier event it is the Dutch. There will be high expectations this year placed on the men’s and women’s World Cup following the memorable success of the 2018 World Cup in Hague, Netherlands.

Due to the introduction of FIH’s ground-breaking, game-changing new event portfolio, the Men’s Rabobank Hockey Champions Trophy 2018 in Breda will be the 37th edition of this revered competition. All of the competing teams – Australia (FIH Hero World Ranking: 1), Argentina (WR: 2), Belgium (WR 3), Netherlands (WR 4), India (WR 6) and Pakistan (WR 13) – will be firmly focused on joining the elite group of previous Hockey Champions Trophy winners. All six nations will be equally determined to etch their name on this unique Trophy and into the history books for eternity.

During the Hockey World Cup in 1978 in Buenos Aires, Argentina, Nur Khan offered the FIH the chance to stage a ‘Super World Cup tournament’ in Pakistan, where the best nations in the world would participate. At the time, the selection of the teams had to be based on the most recent FIH World Ranking, according to the Olympic Games and the World Cup.

Former FIH President René Frank, from Belgium, took Khan’s idea to the FIH Executive Board and they agreed that the tournament would start later that year, in 1978.

The PHF, taking the initiative of this ‘Super World Cup tournament’ (shortly thereafter the name was changed to Champions Trophy), obtained the right to organise the first edition.

The inaugural tournament took place in the city of Lahore, Pakistan in November 1978 and featured five teams – Pakistan, Australia, Great Britain, New Zealand and Spain, with Pakistan winning the title on home soil.

Following a two-year gap between the first (1978) and second (1980) editions of the Hockey Champions Trophy, the competition was played on an annual basis until 2012. The Champions Trophy reverted to a biennial event in 2014.

Australia are the most successful nation in men’s Hockey Champions Trophy history, having won the gold medal on 14 separate occasions, four more than nearest rivals Germany. With the Kookaburras sitting at the top of the FIH Hero World Rankings, they will fancy their chances of claiming a 15th title at this edition of this iconic competition.

The fine heritage of the Champions Trophy is reflected in the opening match of the 2018 competition, which features one of the biggest rivalries in the sport – Pakistan going head-to-head with India on Saturday 23 June at 14:30 local time (Central European Standard Time).

The meeting between Pakistan, the nation that launched the Hockey Champions Trophy back in 1978, and India, the eight time Olympic champions, is a fixture that is sure to draw thousands of spectators to the venue as well as millions of fans tuning in from across the world, eagerly anticipating the latest episode of this long-running battle between two of the sport’s most successful nations.

The opening day drama does not stop there, being followed at 16:00 by another eye-catching fixture, with home favourites and European champions Netherlands taking on Olympic and Pan American champions Argentina. A sensational first day of action is rounded off by the meeting between reigning champions Australia and Olympic silver medallists Belgium, who meet at 18:00 in what is certain to be a hugely competitive fixture between two of the best attacking sides in the world.

Before the action begins on Saturday 23 June 2018, we take a brief look at the history of the nations that will compete in Breda.

The Netherlands (FIH Hero World Ranking: 4) qualified as the host nation of the competition and will be looking to make home advantage count at De Bredase Hockey and Bandy Club. Oranje have a wonderful record in the Champions Trophy, having claimed eight titles between 1981 and 2006. In addition to their eight triumphs, the reigning European champions have also finished on the podium a further 14 times, with six silver medals and eight bronze. Their most recent medal arrived at the 2011 event in Melbourne, where they took silver behind host nation Australia. The Dutch have a fine Champions Trophy record on home soil, having won the title at the 1982, 2000 and 2003 events, which all took place in Amstelveen.

Argentina (FIH Hero World Ranking 2) come into the event as the reigning Olympic champions, following their stunning gold medal win at Rio 2016, which earned them the right to compete in this edition of the men’s Champions Trophy. They are current Pan American champions and also enjoyed a wonderful World Cup event on Dutch soil four years ago in The Hague, where they claimed the bronze medal. That could be a good omen for potential success in Breda, where they must surely be seen as serious contenders for the title. This is Argentina’s sixth appearance in the Champions Trophy, having featured in the 1987, 2003, 2006, 2008 and 2014 events. Their best display to date came at the 2008 competition in Rotterdam, where they took the bronze medal by beating host nation Netherlands on penalty strokes.

As the title holders of the Champions Trophy, World Cup and Hockey World League, Australia (FIH Hero World Ranking: 1) actually qualified for this event three times over. They have a peerless record in the Champions Trophy, having won the event a record 14 times, four clear of nearest rivals Germany. The Kookaburras won five successive titles between 2008 and 2012 and have also claimed a monumental haul of other medals too, with ten silver and four bronze. With a quite remarkable 28 podium finishes from 35 Champions Trophy appearances, they will enter this competition knowing that a 15th title is very much within their capabilities.

Having competed in only three Champions Trophy competitions (2012, 2014, 2016), Belgium (FIH Hero World Ranking: 3) may not have the same level of history as the other nations taking part in Breda. However, they are unquestionably one of the finest teams in the world and will be setting their sights very much on the title. A silver medal at the Rio 2016 Olympic Games remains the high point for the Red Lions, who also took the runners-up positions at both the 2017 European championships in Amstelveen and the Hockey World League in 2015. A gold medal here in Breda could be a breakthrough moment for an extraordinarily talented group of players.

Asian champions India (FIH Hero World Ranking: 6) will also feel that they have a fantastic chance of challenging for the Champions Trophy, a title which, quite remarkably, they have never won. They came agonisingly close at the 2016 event in London, finishing runners up behind Australia thanks to an agonising shoot-out defeat. This could be their year.

2014 silver medallists Pakistan (FIH Hero World Ranking: 13) may have finished in seventh place at the XXI Commonwealth Games on Australia’s Gold Coast earlier this year, but that result hides the fact that they went through the event completely unbeaten. Four draws in the pool phase – against Wales, India, England and Malaysia respectively – saw Pakistan finish fourth in their five-team pool, putting them in the 7-8 classification match where they defeated Canada 3-1. The founding nation of the Champions Trophy will be determined to add to the titles that they claimed in 1978, 1980 and 1994 – victories that all came on home soil.

The combination of outstanding teams and an event taking place in one of the world’s most fanatical hockey countries, there can be no doubt that the Rabobank Men’s Hockey Champions Trophy promises to be a spectacular edition in Breda. For a full schedule and all the tournament details click here.