The Hockey Pro League is designed as an entertainment product and is the centrepiece of the FIH New Events Portfolio, kicking off in January 2019 – replacing the Champions’ Trophy and the World League Semi Finals and World League Final. It will provide – for the first time ever – a regular calendar of must-see events played in packed stadia across the world and throughout the year.

FIH are to be congratulated for the progress they have made in terms of their 2014 Hockey Revolution Strategy to make hockey a true global game, i.e.,

Through the initiative of the Hockey Pro League hockey fans and players alike will enjoy a new annual global home and away league involving the world’s leading hockey nations. It will culminate in a Grand Final with one nation being crowned Pro League Champions and receiving the single largest financial prize in the sport. FIH  believe the Hockey Pro League will transform the landscape of international hockey because hockey fans the world over will be able to watch their favourite sport for an extended period on the same channel each year. Moreover, those fans whose team is participating have the chance to be part of the noise and sheer excitement of watching their team regularly in their home country.

The FIH approach will ensure that international teams will play against opponents once at home and once away each year in this league. Following several months of competition, the top four ranked teams will then qualify for a stand-alone Grand Final event, which will determine the winners of the competition. This will be identical for the men’s and women’s leagues.

The workings of the Hockey Pro League 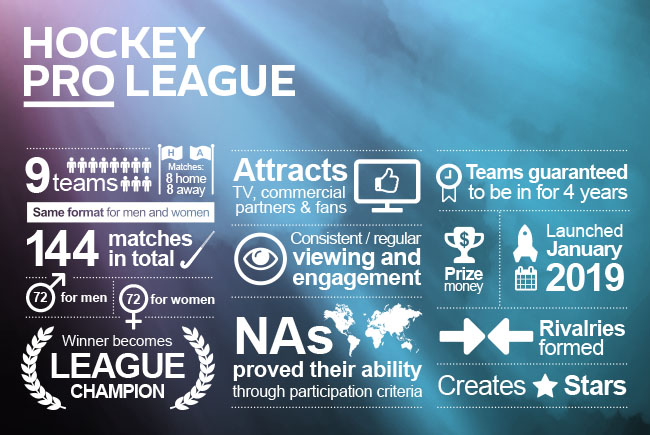 The Grand Final
In addition, so that we can generate maximum excitement and the most fan interest we possibly can – and to build huge media coverage, drive commercial advantage, income generation and all round profile building. We will introduce a Grand Final at which we crown the ultimate winner. The Grand Final will take place within 2 weeks of the close of the league and will consist of an event involving the top 4 teams (both men’s and women’s) playing together at a pre-determined location.

Benefits of the Hockey Pro League

The teams selected will substantially benefit from the increased number of home matches as part of a more consistent hockey calendar. With more opportunities to see their heroes in action throughout the year, national teams’ fan base and followers are expected to grow. This will not only increase the commercial value of the sport through ticket sales, hospitality and merchandising, but also commercial interest in the teams and their athletes through increased sponsorship opportunities. It is predicted that the increased commercial potential of implementing the new structure will generate considerably more value for the sport, which will filter down into all levels, including new and developing hockey nations, from elite to grassroots level.

How will fans be able to watch, read and get information about the Pro League?

There will be channels committed to broadcasting and promoting the League, enabling fans to watch consistently and always know where the Hockey Pro League is being broadcast.

This marks a step change. In the past, broadcast has moved around making it difficult for fans to find hockey when they want to watch. At last, everyone will know who the broadcaster/channels are in their home market so that fans can catch every minute of every match.

The FIH is also committed to substantially upgrading our web presence to support the New Portfolio of events, allowing us to give fans more of the information and interaction that we know they love. The new website will provide a load more stats, and game data, skills and in-depth player commentary that we know Hockey Fanatics cannot get enough of. Our social media platforms will be packed with regular, unique and engaging content 365 days of the year, going deep behind the scenes allowing fans to get to know the players better

It appears there are exciting times ahead for global hockey. Hopefully the full impact will filter down to National, State and Regional based hockey.